What is catastrophizing and how do you know you’re doing it?

X is a young adult who works hard in school, has a loving family who supports him and wants the best for him. Yet, for some reason, he cannot seem to get out of his own head most days. One day in school a peer and him were talking and his peer asked about siblings. When X informed her that he had significantly older siblings, his peer made a comment about how he must have been an accident or a “whoops”. 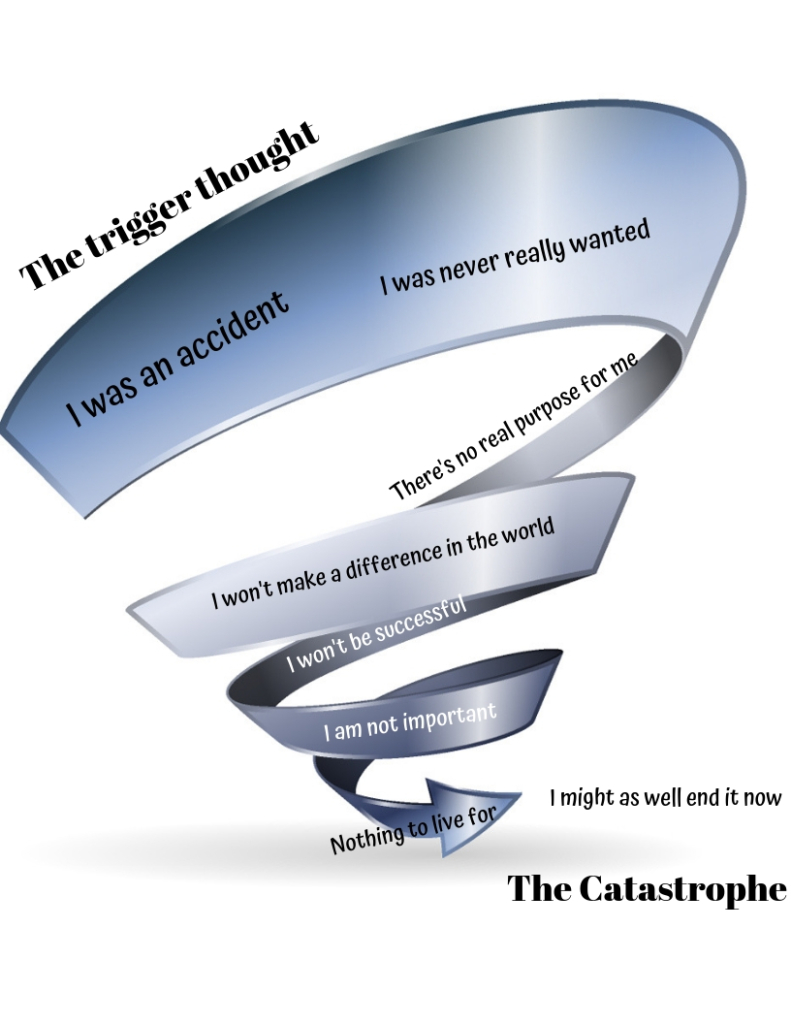 This is the way X and I drew out his thoughts. He was able to decipher them and see exactly how he got to his catastrophe. Although this is an extreme example, catastrophizing itself is extreme. Let’s see another real life example of Y. 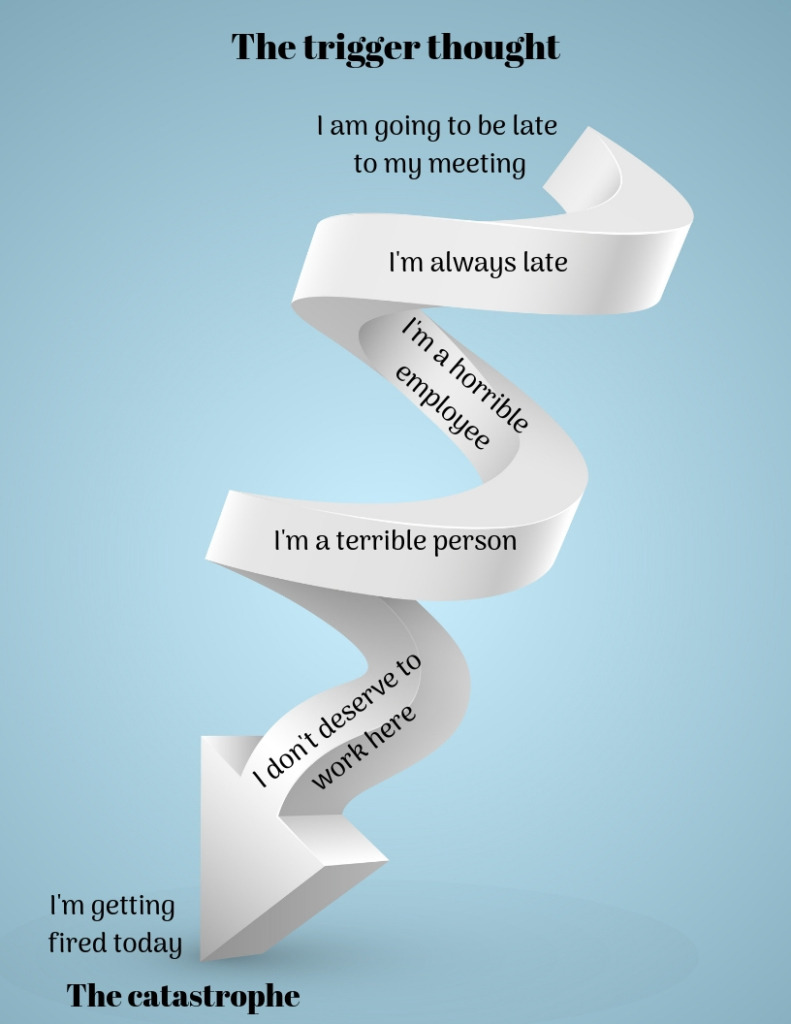 Y had tons of anxiety and when we put her thoughts together, she was able to pinpoint exactly where in this spiral toward catastrophe her anxiety spiked and her entire day was ruined. It was not at the first step. Or the second. She actually felt her anxiety spike between 4 and 5. When she stared to put a label on herself that she was a terrible person and didn’t deserve her job which she really loved, her anxiety went through the roof and her day became derailed.

Now that you have seen examples of what catastrophizing looks like, what can you do to get out of the spiral?

What we were able to do here for Y was put, what I call, a fact checker in between 4 and 5.

Although initially she thought she had evidence to support this, she quickly realized that she had much more evidence contrary to the trigger thought and she was able to avert reaching the catastrophe when she fact checked herself.

What happens if you are already at the catastrophe?

Well, know that the truth lies somewhere in the middle.

If you are standing outside with your box full of stuff because you got fired, what are the chances you will be just fine?

For Y, she quickly came to realize that she was making up stories in her mind about a trigger thought led by her anxiety. She also realized that she would be just fine if she lost her job and we even created an entire backup plan for her just so she knew without a doubt, she could immediately implement it if she needed to.

For X though, this was not as easy. He was able to find his spot on the spiral of where he realized he was heading into deep depressive and suicidal thoughts. He was then able to implement the above questions and start to recognize that there was not enough evidence to support his trigger thoughts and that his catastrophe was not at all what he wanted nor what he actually believed. He was able to avert a catastrophe and then implement his back up plans and goals.

The mind can create beautiful, scary and oftentimes exaggerated details of thoughts that enter our minds, especially ones that are touching our vulnerable spaces. Once you throw anxiety or stress or fear into it, it’s like a rollercoaster heading down with no bend in the track to lead it back up.

That’s where you have to create the bend. Throw the fact checker at the track and watch as the truth begins to materialize in front of you. Know that nothing is permanent and that what’s for you will not pass you by.

Life is an ever changing track with a lot of spinning, turning and obstacles along the way. We can learn to go with it and also know when we need to implement different tools to help us along the way.

This site uses Akismet to reduce spam. Learn how your comment data is processed.